The Look Up Gallery is pleased to present "Artists Are Like Water" and to produce "Floating Artist Studio".

"Artists Are Like Water" presents new works that escape. Doubling, mirroring, absorbing, collecting, freezing and then disappearing, their approach sinks time into a dream. Manifold factotum, the artists make works central to no place other than soft darkness. Looking in a sustained way in a sleepless mind.

About time, from time to time, do time, time yourself, weekends. In time, in no time, in good time, between time, time and again, lifetime, time-worn, pass time, mark time, buy time, keep time, on time, in time, time off, time out, time in, time card, time lapse, time zone, the beforetime, the meantime, the after time, the all-time. - Warhol

From August 21-24th, "Floating Artist Studio" is caravan of canoes carrying 4 artists, a filmmaker, and an advertising executive emeritus. For 3 nights along the Russian River alongside artist, Marie Lorenz, who pushes out in one of her unique handmade boats, we physically immerse into the here and the now. 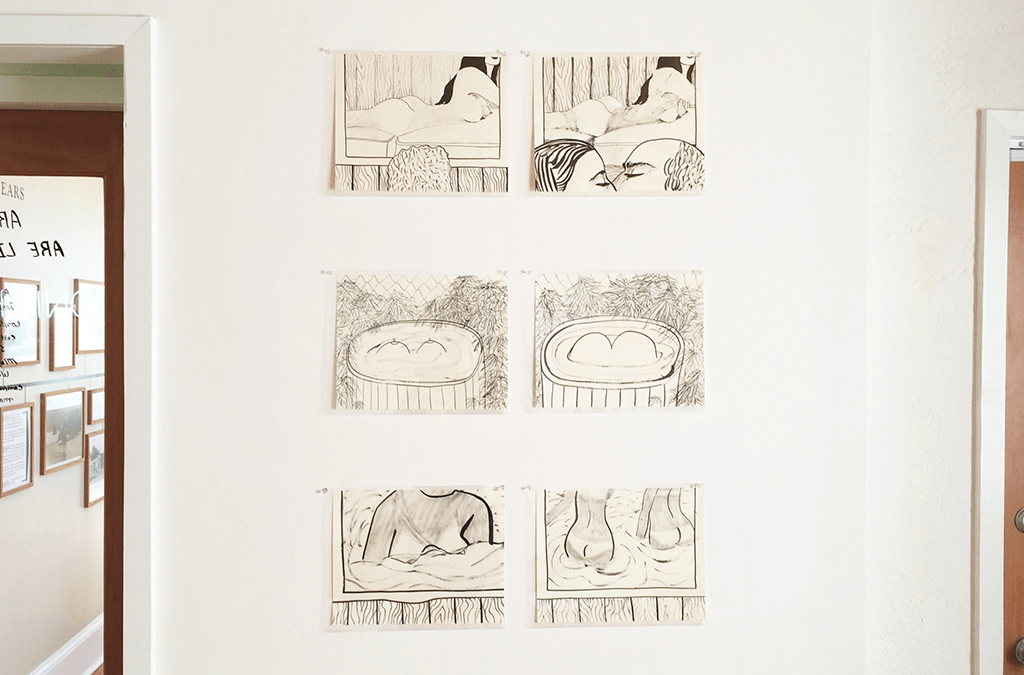 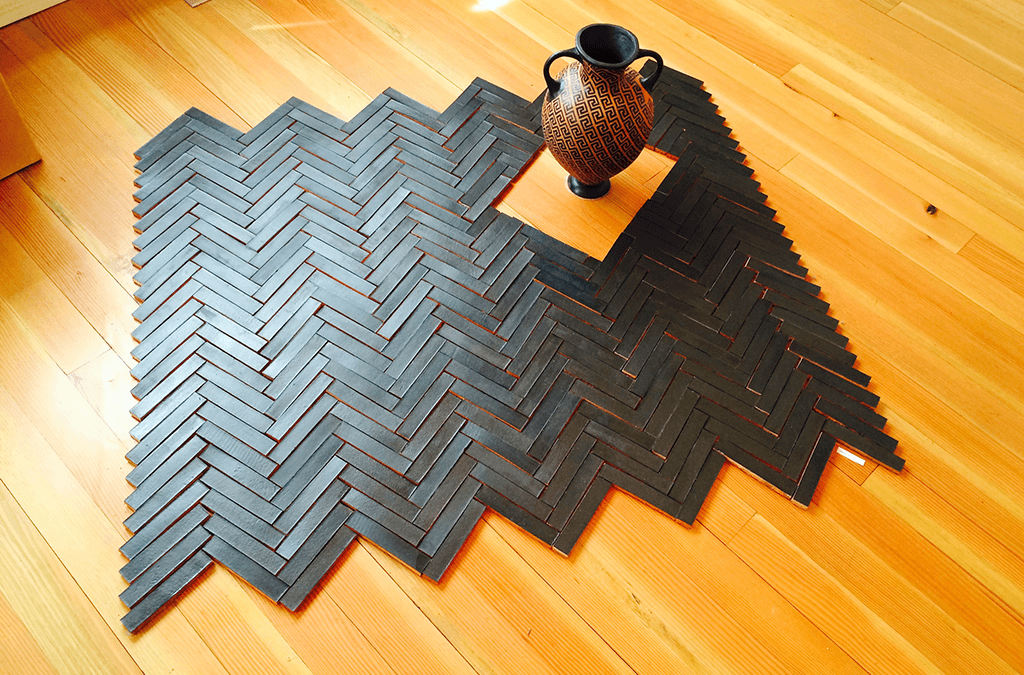 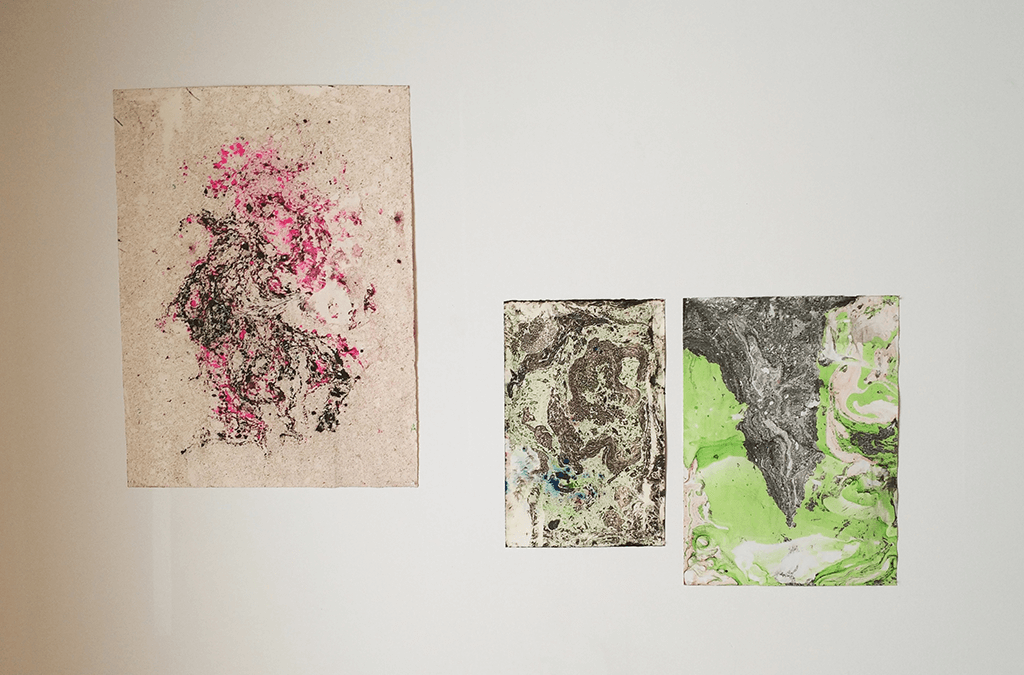 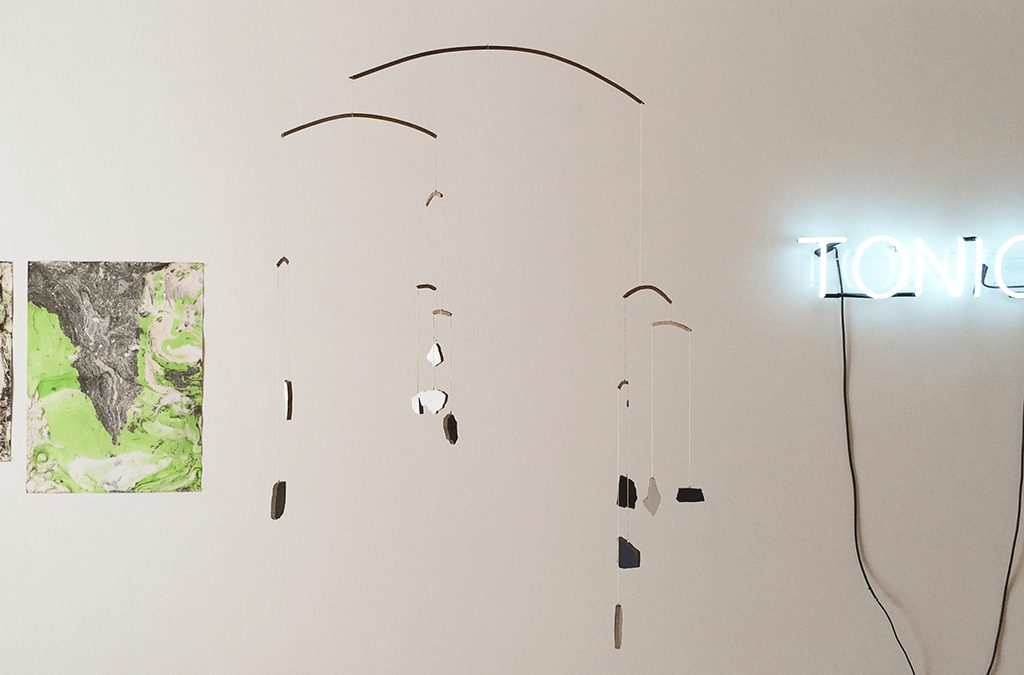 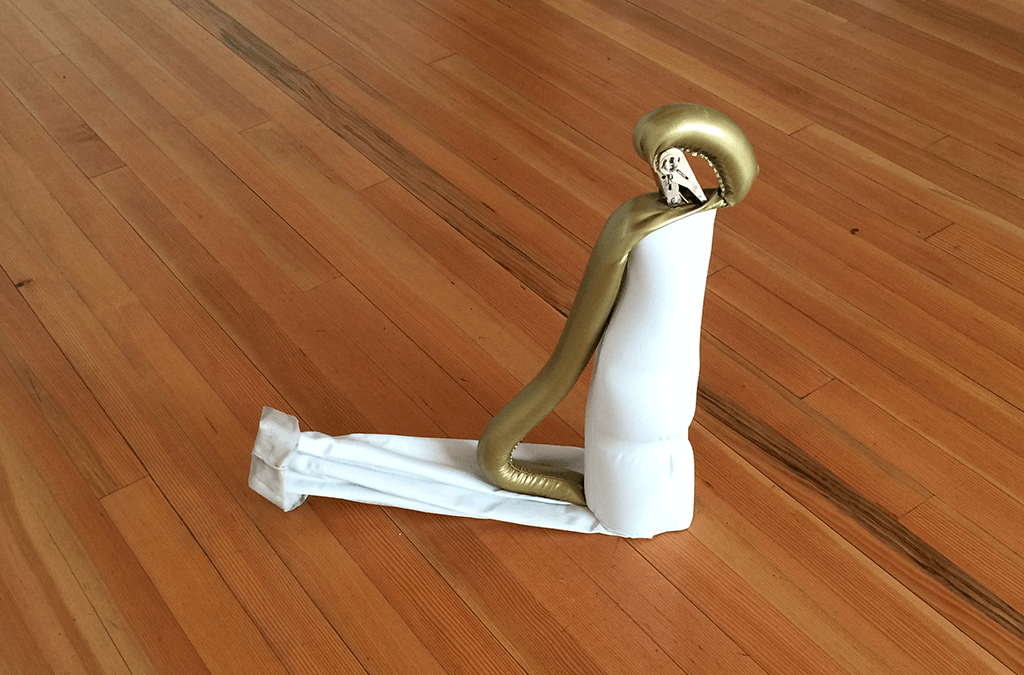 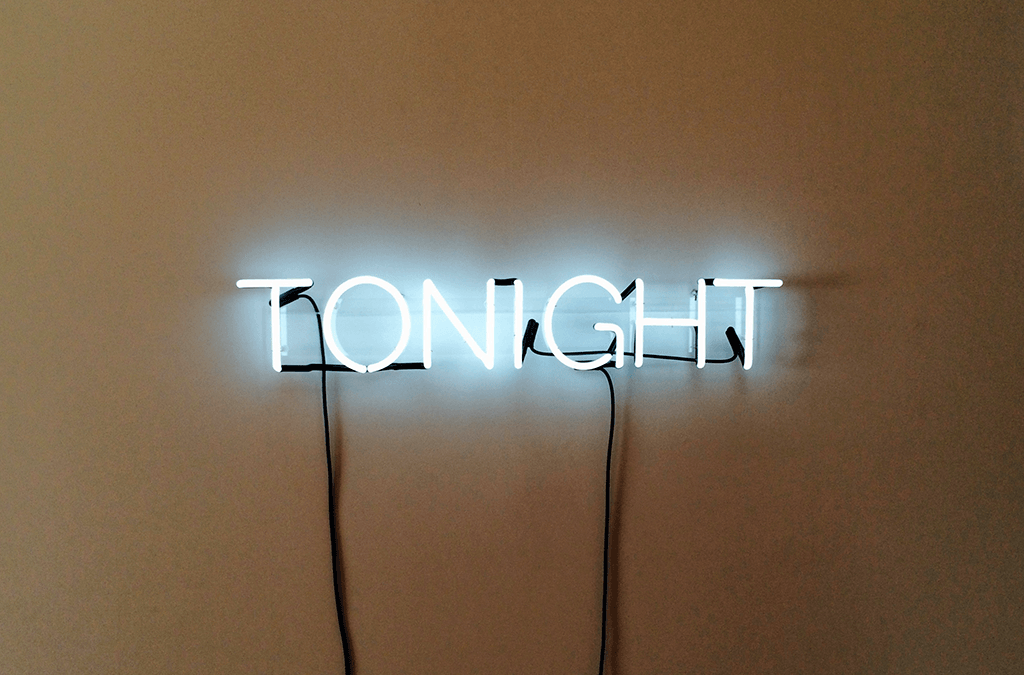 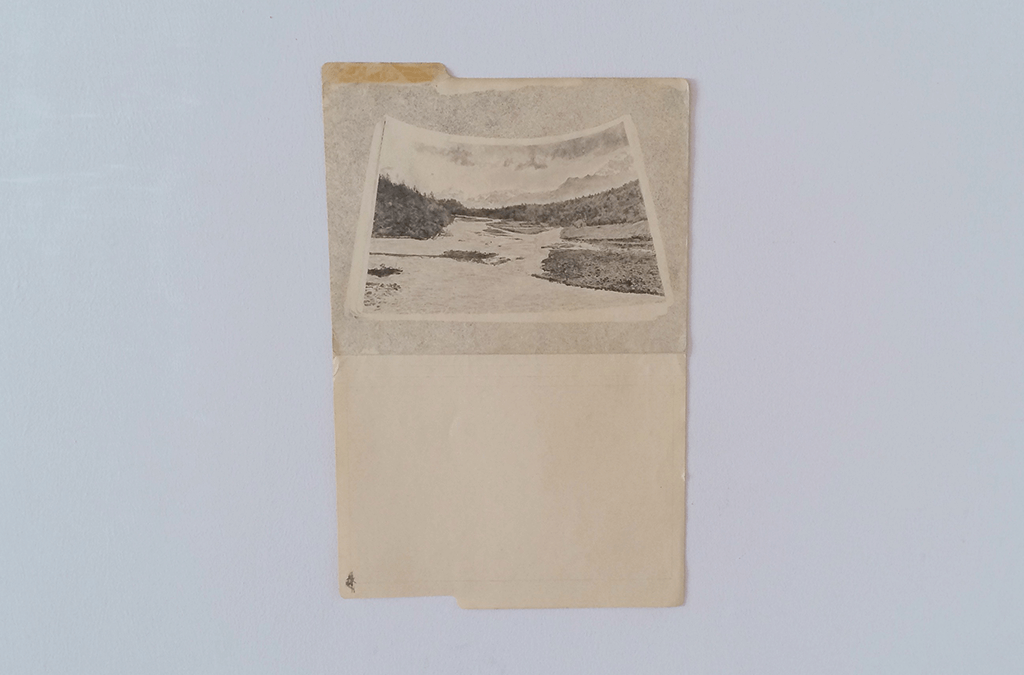 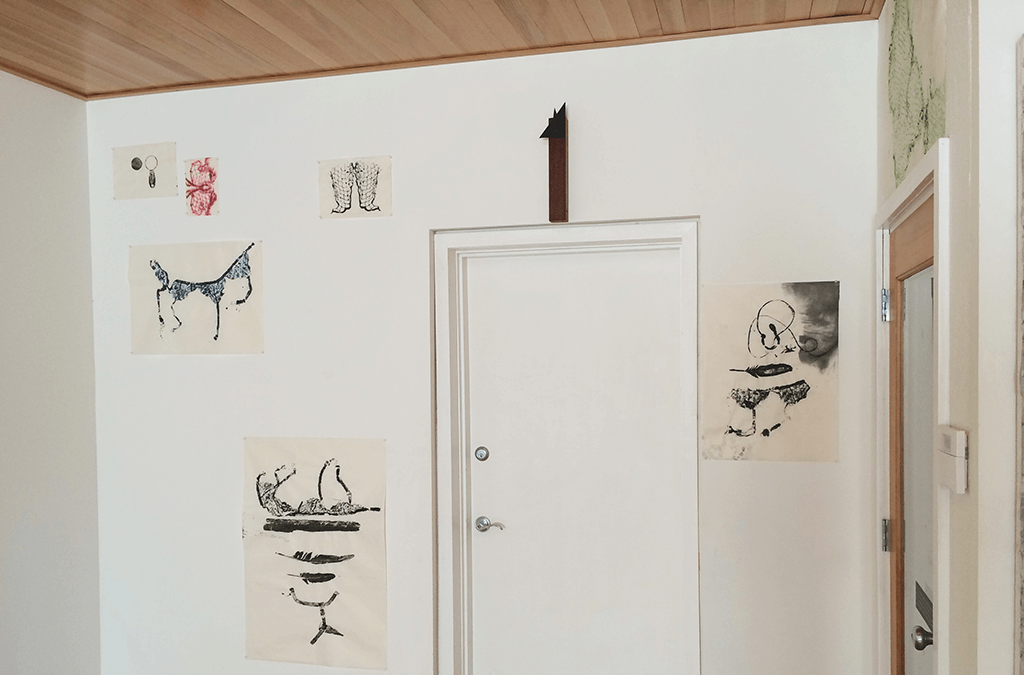 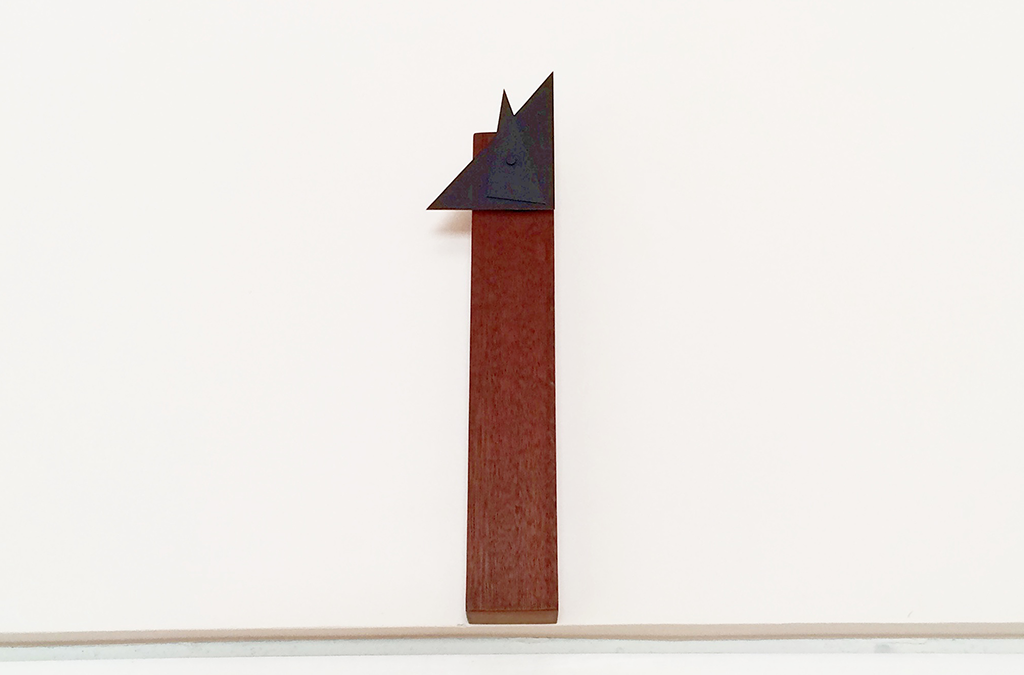 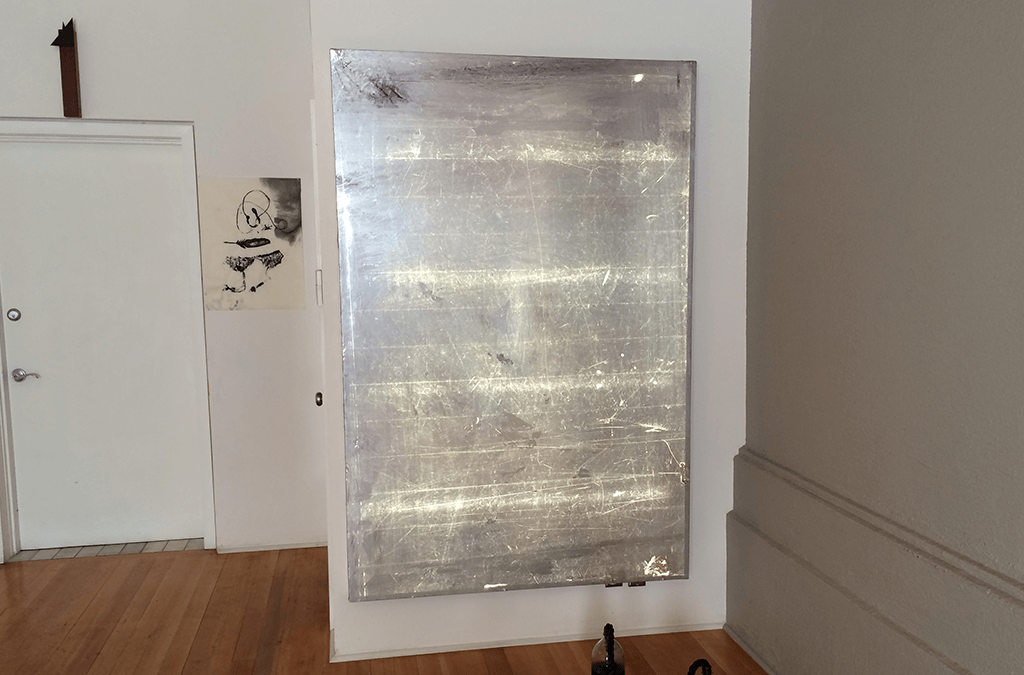 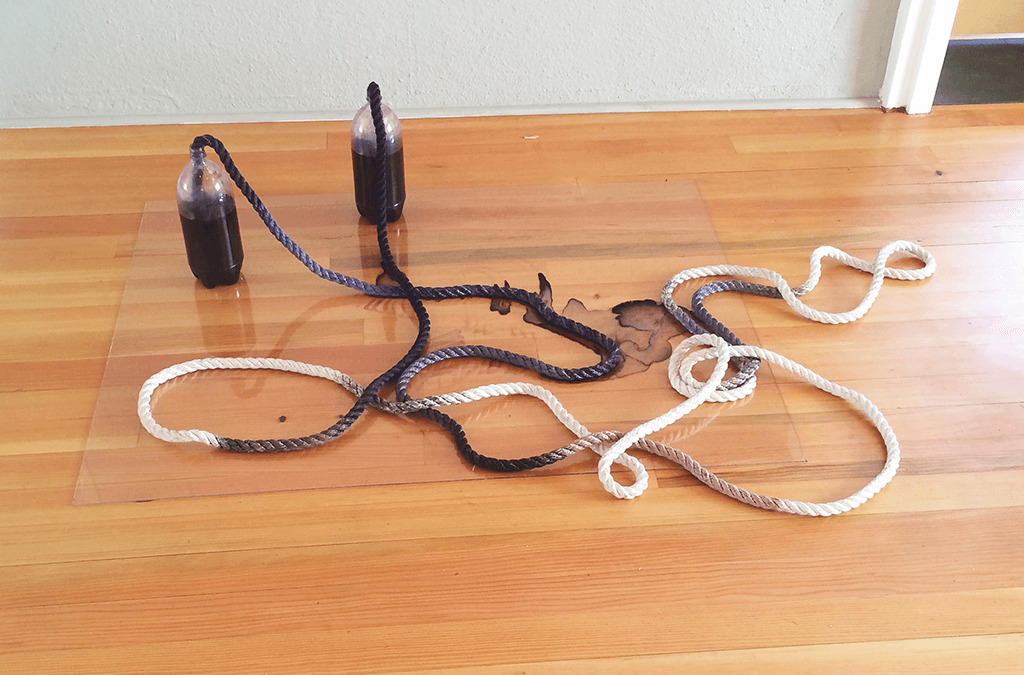 Alyse Emdur (b. NJ, USA 1983) is a Los Angeles-based artist who received her BFA from Cooper Union and MFA from the University of Southern California. In the past year, she has re-invested in the picture plane and the limitations of black ink on paper. Like her earlier work, the drawings use earnest humor to face loneliness, existential crisis, social struggle and the desire to escape. Intimate in scale and medium, they are both personal and political.

Her work has been exhibited at the California Museum of Photography in Riverside, CA; the Museum of Contemporary Art Santa Barbara, CA, High Desert Test Sites, Zzyzx, CA; Armory Center for the Arts, Pasadena, CA; the Lambent Foundation, Printed Matter, and the Visual Studies Workshop in New York; the Philadelphia Photo Arts Center, Haverford College, and Arcadia University in Pennsylvania; the University of Texas Visual Arts Center in Austin; the Lab in San Francisco; Small A Projects and Elizabeth Leach Gallery in Portland; the Wolfsonian Museum and Bas Fisher Invitational in Miami; La Montagne Gallery in Boston; Laura Bartlett Gallery in London; Spacibar in Oslo, Norway; Gallery Today in Brussels, Belgium, In Situ in Paris, France, and the Noorderlicht Gallery and Kunststichting Artis, in the Netherlands.

Her work has been featured in Art in America, Art Papers Magazine, the Atlantic, Cabinet Magazine, Foam Magazine, the Los Angeles Review of Books, the New York Times, and Vrij Nederland Magazine. She is a recipient of the 2015 California Community Foundation Fellowship for Visual Arts and the 2010 Printed Matter Award. Her first book, "Prison Landscapes" was published by Four Corners Books in January 2013.


Los Angeles and Paris-based artist, Jeremy Everett (b. 1979, USA) received his Bachelor's degree in Landscape Architecture and MFA at the University of Toronto. A Colorado native, Everett was exposed to raw space, and the pulsating, contemplative existence elicited by bare earth. Citing inspirations such as artist Robert Smithson, Everett’s work stems from a centre beyond process and creation; neither fully created nor complete.

He contributes a mylar painting that has a surface akin to a layered mirror and a sculpture with a rope suspended between two bottles of color. Together, they are his latest experiments in highly charged poetics.

He has been interviewed in New York Times T Magazine and nominated as a "Shooting Star" by eminent photographer, Bruce Weber in Smithsonian Magazine. His work was reviewed by Holland Cotter in the NY Times, Flash Art, Modern Painters, and ArtReview.com.


Constance Hockaday lives and works in Oakland, CA. She received her MA in Conflict and Resolution and MFA in Socially Engaged Art at Portland State University and a BA in Participatory Community Development at Prescott College. Her work searches for various openings in the ways one can organize space-- to come into direct contact with that point where the physical, social, and spiritual realms intersect on the water.

Her neon sign "TONIGHT" illuminates the loss of a vital subculture in the Bay Area. With the evictions of the Latino drag night club, Esta Noche and the only union-run, worker-owned strip club, Lusty Lady, she produced a floating barge cabaret show in the Bay Area where over 600 people attended performances commemorating these institutions.

She was awarded a TED Fellow, commissioned for the above-mentioned performance production by Southern Exposure, has lectured at Apex Art, New York, been a panelist at SFMOMA for "Social Practice West" and participated in group exhibition, Swimming Cities of Switchback Sea w/ Swoon at Deitch Projects that toured and was reviewed in the New York Times.


Colter Jacobsen (b. 1975) in Ramona, Ca has lived in the Bay Area since attending the San Francisco Art Institute in 1999. He references his art practice with a quote by Gavin Maxwell from Ring of Bright Water "there is much pathos in the small jetsam that lies along the tide lines: battered children's toys; a hand-carved wooden egg cup marked "John"; the scattered skeleton of a small dog-- around these and many others one may weave idle tapestries of mystery. Some things challenge fantasy to account for their existence.”


Sto Len (b. 1978) Danville, Virginia lives and works in Brooklyn, New York. He studied sculpture at Virginia Commonwealth University, Richmond,VA. He adapts a 12th century Japanese printing process known as Suminagashi (floating ink), using less traditional materials to produce monoprints. His works use the polluted water's surface of Newtown Creek, a superfund site that divides Brooklyn and Queens to document that visual moment in the water.

Sto has been a resident artist at the Clocktower Gallery, performed at MOMA PS1, New Museum, St. Marks Church, Ontological Theater and Ramiken Crucible, New York. His work has been reviewed by Roberta Smith (2011) and Holland Cotter (2005) for the NY Times, Art Forum, Art in America.


Marie Lorenz (b. 1973) lives and works in New York. She received her BFA at Rhode Island School of Design and MFA at Yale University. She has received grants from Artists Space, Harpo Foundation, Alice Kimball English Travel Fellowship, was awarded the Joseph H. Hazen Rome Prize at the American Academy in Rome (2008) and commissioned by Frieze Art Fair (2014). She has completed solo projects at Ikon Gallery in Birmingham, England, Locust Projects, Miami, and Jack Hanley Gallery, New York. She has shown works at the Hessel Museum of Art at Bard College, Glass Pavillion, Berlin, Goethe Institute, New York, Kunstlerhaus, Bremen, and the Drawing Center, New York.

Her performances have been included at High Desert Test Sites, Joshua Tree and MoMA PS1, New York. Her ongoing project ‘The Tide and Current Taxi’ is an exploration of the coastline in New York City. Her work has been featured in the Wall Street Journal (2014), reviewed by Jerry Saltz in Vulture (2014), included in Interview Magazine by Christopher Bollen, selected by Jerry Saltz "Top 10 Art Picks" New York Magazine (2012), reviewed by Roberta Smith for Art in Review (2012) and selected by Andrea Zittel for "Artist's Artist" in Artforum (2006).


Will Rogan (b. 1975) Highland Park, IL lives and works in Sausalito, CA. Rogan received his MFA from the University of California, Berkeley (2006), BFA at San Francisco Art Institute (1999) and attended Skowhegan School of Painting and Sculpture (1998).

Rogan creates a mobile conceived around and possibly gathered from bits of flotsam and jetsam surrounding the controversial "anchor out" community who live rent-free in the Sausalito Bay. The mobile, an ambiguous yet balanced construct is part of our kinetic landscape. He also constructs a mechanical clock, the first of which were powered by water by a Chinese polymath in the 1st century BC.


Cammie Staros lives and works in Los Angeles. She received her BA in Art and Semiotics from Brown University (2006) and her MFA from CalArts (2011). Much of Staros’ work plays with the expectations of signifiers.

"Night Swim" is a ceramic floor piece made up of black painted tiles and a Greek-design influenced vase. Both elements are sculptures of their real-life counterparts: the tiles are loosely laid, hand-cut and broken apart, giving them an uneven and rough-hewn character; and the pot is hand-built rather than thrown. They reference the borders between art and artifact.


May Wilson (b. 1986) Hollywood, MD lives and works in San Francisco. She received her MFA from University of California, Davis (2013) and her BFA in Interdisciplinary Sculpture from Maryland Institute College of Art (2008)

Wilson will contribute “Grounded”, a concrete-filled vinyl sculpture with marks of distress from the making. A second, smaller sand-filled vinyl shape is tethered to it. The material based sculpture suggests a historical narrative for itself, and makes a loose reference in scale and presence to ship moorings.

She attended Skowhegan School of Painting and Sculpture (2013) and was a Graduate Fellow at the Headlands Center for the Arts (2013) and was a resident artist at Neu Kirche Contemporary (2015) and received a grant from the Center for Cultural Innovation (2013). Her recent projects include public sculptures in Pittsburgh and San Francisco, group shows at CULT Exhibitions in San Francisco, the di Rosa in Napa, and Aggregate Space Gallery in Oakland.


Special thanks to the Chalk Hill Artist Residency for hosting the first night of "Floating Artist Studio”. http://chalkhillresidency.com